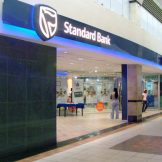 A business banker of Standard Bank is dissatisfied with Standard Bank’s unprofessional conduct and this time, has had enough.

A business banker’s experience at Standard Bank and the ill-treatment from one teller  has caught the attention of media. On Saturday, a business banker with Standard bank recounted his account of what he called a failed banking practice by Standard Bank officials. The company involved in this Ordeal is Maphorisa Initiatives, with an active business account with Standard bank since 2011. 2 weeks earlier to this encounter, Ms. Nxumalo went to sunnyside branch to withdraw money with the company’s business developer (Manager) David Aladegbaiye Patricks.

Standard bank's unprofessional ethics has no bounds. We just lost our deadlock time to get material for a business and…

During the transaction, the teller asked for identification and confirmations, all of which were made available but the teller seems convinced, the CEO was not dressed to the standard of a CEO or doubted she was the owner of the company. The agent then told the CEO she would leave a note on the account for a proof of address on any other transaction that was to be processed on the account.

The business address and the trading branch has not changed, so the CEO was quite shocked but the business banker who opened the account at the same branch was not available to assist, so she left. ” We were downplayed by the agent, the way she looked at us and even spoke to us, showed she was not happy to deal with us, she asked a lot of questions and I believe she put a note on the account as a way to spite the CEO, this is not the first time agents in Sunnyside branch of the bank have proved to be unskilled and unprofessional” says David Aladegbaiye Patricks. The Manager for the company was attending a meeting at Centurion mall on the 21st of April and needed the Statement of the company,

so he dashed to the branch ATM and got the document but due to his divided attention left the card in the ATM. On the 22nd of April, a client of Maphorisa Initiatives made an urgent order from the company for the 23rd and confirmed deposit of funds. An acceptance letter was mailed but unfortunately the business owner missed the deadline of the project due to Standard bank’s unprofessional agents. The client cancelled the orders on the 23rd made a requested for a refund on the 25th from the company. As a business banker, the CEO believes there should be some better treatment ” the agents could have informed us earlier about the limited powers of a branch bank and that could have saved us time and business, but they preferred giving orders without verifying the nature of the transaction”. Standard Bank cannot keep treating clients in an unprofessional manner, banks ought to help their client create business and not loose business.

The Business Developer said he would be taking the situation up with the Ombudsman for banking. ” Our business is in a stage that we require injections considering the numbers of projects we are involved in, so we are not going to take this failed transaction lightly, as it would affect some business transactions, the ombudsman would be our recourse in this case”.

Could not authenticate you.